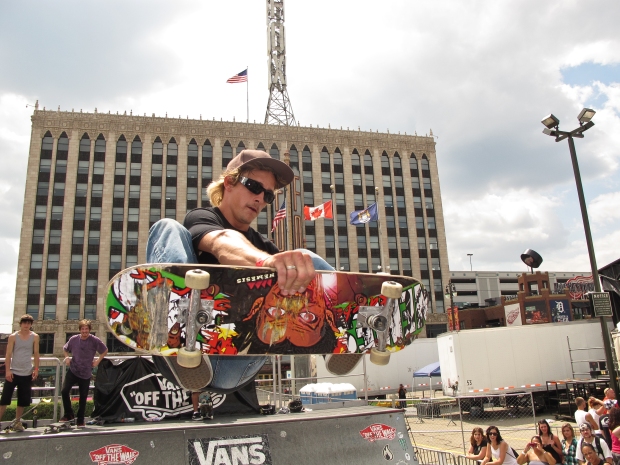 Put away your cellphone as well as that crappy point and shoot and enjoy the show. This is going to be one of those random things where I’ll chat about a photo. All the camera info can be seen as well as my reasonings behind the image.

This is going to be one of those random things where I’ll chat about a photo. All the camera info can be seen above but reasons are going to be down here.

Following in the footsteps of all the other posts about strobed action shooting comes this image of Modern Skate & Surf team rider Mark Davenport. Ideally a Consumer Point & Shoot like the Canon G11 is not my preferred camera to be shooting sports with, but I was at the Warped Tour to enjoy the bands and it was the only camera I had with me. My thought process for this image was that I need a fast enough shutter speed to freeze the subject. I really didn’t care about the depth of field because with the small image sensor of the camera I was going to have plenty no matter what F-stop I was at. Shutter priority was the answer I set it to 1/800 sec and continuous shoot mode or burst mode. I was at the widest focal length this little camera would allow and the cramped deck of the mini ramp didn’t permit me to properly compose the shot. So from a low camera angle I would follow rider with the camera and when he got close to me and I would press the shutter button and hope that I would catch a frame.

The use of flash for this image was to play the role of a little fill light. The flash I chose for the job was the tiny on-camera flash of the G11. The camera made all the decisions as to what power the flash would fire. Judging by the shutter and ASA settings I would have to say the flash was most likely at full power.

All this step-up and thinking for one image and the camera took care of most of the dirty work. Image was poorly cropped in camera and not in post (Lightroom 3).